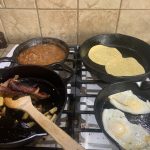 Enchilada’s have become a new way to use my garden produce starting Friday for the beginning of this weekend. I used a mix of tomatoes and peppers from my garden cooked in a skillet and then pureed in a blender. I then used some of the pulled pork leftover from earlier this week and the dish turned out delicious!

After minor kitchen cleanup I still wanted to keep going to work off the enchilada treats and clipped my bushes and roses in the front yard and then went out back and trimmed the grass and did a little straightening up.

I then put some roses I inadvertently clipped in a rose vase on one of my bars.

A nice active start to a mild weathered Saturday with decent air quality I was determined to take advantage of.

I used this recipe https://www.asweetpeachef.com/homemade-enchilada-sauce/ with changes of Poblano chili and Serrano pepper with Early Girl, Black Plum and Lemon tomatoes and a touch of cinnamon.