I updated to the latest WordPress version 5.5.1 and updated all of my themes and plugins then decided to update the Centos 7 Linux OS patches of this virtual system as well. I also took care of some pesky ssl issues that had mixed ssl and non-ssl objects so that the site is more compliant and friendly to visitors. Now you will see the padlock indicating my site is safe. I updated the certificate and did the .htaccess ssl redirects over the weekend Saturday around noon.

I haven’t always taken advantage of proper storage of my garden produce. Well now I am finally using my FoodSaver and planning on using my dehydrator both purchased years ago but never used.

Over the weekend I cleaned up the dehydrator and took the FoodSaver vacuum packing storage system out of the box?

The following are my first time blanching and getting items ready in long term vacuum packed storage.

Started Sunday staying up late Saturday into Sunday morning getting staged for preserving my garden vegetables and herbs. Then upon waking up my website was down so had to troubleshoot that by looking in the logs and it was an entry in the ssl logs as I had started making ssl updates and changes yesterday.

Due to the website issues I then got a late start on prepping my brisket I set to thaw in the refrigerator and then cleaning the ash off my grills. Then cleaned the Traeger grill and prepped the grill and got the brisket on. I then got my front lawn in order since the lawn service kept canceling and would not be by until September 10th.

I like doing my own lawn but when going for long periods traveling I need someone and I don’t want to find someone last minute. I used Sunday to get my rose bushes trimmed the way I normally have them the past 14 years so when the lawn service takes back over they understand better what I have said before. A demonstration shows so much better than words many times. The lawn service has been decent just need to show them how I wanted things done.

Then I fast smoked the brisket in about 8 or 9 hours instead of 15 hours and turned out tender to a fault as it was almost pulled beef. I also threw some beef ribs on since they had thawed out. The beef ribs meat was super tender fall off the bone tender too.

Here’s the visuals including my grits breakfast.

Picked more vegetables from the garden then feasted on an eggplant, squash, tomatoes casserole. I also threw in a bunch of basil from the garden along with garlic, a little pepper and salt, mixed with Parmesan cheese and olive oil.

Here’s pictures of the harvest and casserole.

In looking for a different way to use my tomatoes out of my garden I decided to make fresh pizza sauce and a pizza from scratch.

I used early girl tomatoes, basil and rosemary from my garden in the pizza sauce and making some herb dough.

I like to cook but really don’t bake so had to go out and get some yeast from the past 5 years. I had yeast who’s expiration date was in 2012. Most likely yeast from about 2009 from making plum or peach liquor no distilling!

Anyway I didn’t realize how long I had to let the sauce cook and once I got the yeast hoe long I needed to let it rise. Then I went around finding good Italian sausages and pepperoni. Besides what I already mentioned I also used squash from the garden and some sliced olives from a can.

This was a disjointed impulse project and now that I have an ideal of how to do this I will plan and make it smoother plus enhance the experience.

Anyhow here’s the pictures of the process.

The past months I have been doing a complete planned upheaval of my entire infrastructure. I’m adding more capacity to my NAS plus implementing better RAID and updating my FreeNAS. I’m moving my entire network to 10gbe. I’m moving all servers from rack mounts to HPE C7000 chassis servers which I had to refamilarize myself with after being away from my surplus find for about 7 months and initially never really having the chance to dive into months ago. I have updated my Xcp-ng hypervisors as well and they will be decommissioned as part of the migration to the C7000 chassis eventually.

This infrastructure total rebuild along with both parents passing and dealing with the estate and family drama plus covid-19, my rental property, HOA board and Neighborhood Watch duties I have not had a boring moment in 2020. This doesn’t even include my possible plans to update my Linux and Windows workstations with hot swap cases as well as my gaming system that has been left totally neglected for a while.

All of this requires planning testing exhaustively before ordering even the smallest items poring over compatibility charts not just with HW but firmware all without support contracts to get to firmware for severe advisory or compatibility firmware fixes easily. Just getting the proper delivery platform to get the firmware to the various components is challenging. I think I have used about 10 different methods of updating different firmware updates just for the C7000 not to mention external switches and routers. With surplus parts getting them from all overt he country and locally you need to jump in and test right away to determine if they are working properly or you are doing something incorrectly because returning parts is time lost and can stall progress and with Covid-19 shipping has added days sometimes a whole week getting items.

I knocked out a couple of easy steps first like updating Xcp-ng hyper-visor to 8.1. Configured a few bl460c Gen7 chassis to play with Virtual Connect and get supremely comfortable with it and decide how to uplink to the network and that’s when the real fun began. I had to update and apply firmware just to be able to get initial control of the C7000 through the OA and Virtual Connect environment, through browsers.

Now with that lengthy summary here’s a bulletized version of what I have done minus things forgotten:

Well that is what I have been up to infrastructure wise the past several months along with the other craziness. I still have a ways to go and will catch up with all these tasks as I complete them hopefully! All this will end up being a scalable future proof environment I can hopefully start some serious programming and other testing and hosting with that will lower my power out put as well.

I ended up with huge squash picking my garden today along with a huge amount of tomatoes, yellow pear, cherry husky, early girl and beef eater. I also got eggplant, Serranto peppers, Havasu peppers, raspberries as well as gathering my normal daily herbs of basil, sage and rosemary for things like dip sauce for tri-tip, squash salad and salsa.

The huge squash and over abundance of tomatoes means I haven’t been harvesting in a timely manner. 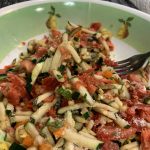 Wanted something different so decided to make a salad using my new professional mandolin using squash, sweet peppers, tomatoes and some salmon I smoked earlier this week.

I didn’t really have a set recipe but estimated I used about 4 cups of julienne squash I shredded with my mandolin. Some early girl , pear and cherry tomatoes. I seasoned with chopped garlic, Thai, sweet and purple basil, fresh rosemary and sage, plus diced white onions. Then hit it with 1/4 cup of balsamic vinegar a 1/4 cup of olive oil about 1 teaspoon of Himalayan salt then crumbled on some smoked wild caught sockeye salmon sprinkled with Parmesan cheese.

This salad was absolutely delicious! This will now be one of my go to concoctions from my garden! I almost couldn’t stop eating!

As for my smoked salmon on my new Traeger Silverton I have learned to properly cure it before the smoke and most importantly rinse all the rub off the salmon before drying over night.

This salad screams summertime with flavor!

I got some things done and still was able to do a cook on my new Traeger Silverton 810 Wifire grill a bit late with some garden side dishes.

Today I intended to get some work done on my C7000 and the rest of my infrastructure like the backend 10gbe network. I didn’t get all my parts in this week plus I couldn’t find someone to fix a busted drawer in my kitchen so I decided to fix the drawer myself. Fixing the drawer was not super hard just a serious unneeded time sync that was needed for other things I need done.

I had decided at first to use finishing nails then started thinking small screws would be great if I countersink the screw heads. Well I bought stuff for each venture so I wouldn’t have to go back and forth to Home Depot got home and decided to use the finishing nails. I also picked up a couple of grill pads one for my new Traeger and one for my Oklahoma Joe stick burner. I cleaned and slid my old grill pads under my Westinghouse gas grill am older Traeger respectively.

Back to the kitchen drawer repair I got the drawer apart put the nails in and then decided I needed to protect the inside of the drawer where it chipped off wood with some wood putty. Gathered plastic wood as wood putty doesn’t seem to be a thing any longer and used that to fill in the parts of the drawer chipped out. Then noticed how chalky the wood plastic was an decided to varnish or apply wood glue. I had wood glue but it was old and one useless blob so I went back to Home Depot found no varnish so got just wood glue and set that up on the drawer and will wait for the 24 hour bonding period but the drawer feels solid and ready for another 14 years of service.

I just did a whole chicken and some chicken thighs since I ended up rushing things today on my new Traeger Silverton 810. Everything turned out ok the cook is a bit different than my old Traeger but still good and the remote Wifire is great!

I also picked a nice crop of cherry tomatoes, yellow pear tomatoes, sweet peppers, a couple of Serranto peppers, basil, Mexican Tarragon, squash and rosemary for side dishes tonight. I saw the start of my first eggplants tonight as well.

Here’s some photos from the day.

My vegetable garden is starting to produce at a very high level. The squash production will be huge since a lot of squash plants came up from squash gone to seed I rototilled into the soil this year. Basil is also coming in from prior years seeds as well as the ever present mint plants.