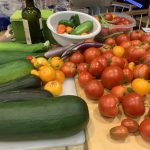 I had a massive harvest today partially due to not picking produce everyday for the past week. So much else has been popping up I got out of my routine. I didn’t want to pick items without being ready to do something with the produce and that caught up to me big time!

After working around in the computer room all day I had neglected getting my dinner ready which was going to be a whole chicken so I did that on my Traeger smoker and then cut up some produce and grilled that on my gas grill. Basically cut up squash, jalapeno, habanero, eggplant, sweet orange peppers, tomatoes along with rosemary, sage, purple and sweet basil from the garden thrown together I just brushed them up with some balsamic vinegar and dressing, garlic, coarse kosher salt and pepper.

Though it was a late dinner it was tasty with some leftovers for tomorrow. Chicken was fall off the bone tender and still moist and the veggies nicely complemented each other with that roasted flavor. I stay up late a lot anyway so I still will not go to bed within 3 or 4 hours of eating.

Next figuring out my different methods of preserving which will include bagging, pureeing, freezing and maybe even canning. I seriously don’t have much space for storage anywhere now which will need to be resolved but I always find a solution!