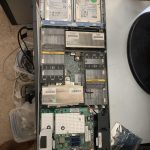 I made some changes on my Zoneminder server that also hosts Plex media server plus extended the drives on one of my virtual Plex media servers that also is a Salt master, plus had to extend my boot partition on my Linux workstation.

First I decided to extend /boot on my recently re-installed Fedora 34 boot partition. During the re-install I didn’t notice that the /boot kept the older size of prior installs. Seems /boot needs more room these days so I decided to increase to 1gb from 265mb. You want contiguous space for /boot so the best bet is reinstall to keep that space from skipping all over the disk. This is not that big a deal for me especially on my Linux workstation as I always have a separate hard drive for my /home with all my environmental settings that I also backup to my NAS regularly. I even backup /etc to a directory in my /home so I can nitpick thinks like my PhpMyAdmin settings I have for various servers after a reinstall. Then my hard drive I can take the fastest 12gbs SAS or even and SSD to improve performance and then clone or just reinstall to my boot drive

In prep for the reinstall I made a list of all my packages in a file so that I could just get my repositories in place point to that file and do a reinstall. However I also like discovering new opensource software in Linux which is why I love using Linux so I also made a list of the repo and group install commands I used. This made the reinstall a breeze and took about 2 hours including making breakfast of potatoes, eggs, bacon and sausage in parallel and eating that breakfast.

I had a prior method of reinstalling packages but looked for a different method and went with what I found on this site to prep for reinstall: https://www.addictivetips.com/ubuntu-linux-tips/quickly-re-install-all-installed-apps-on-fedora/

I ended up booting off a live Fedora 34 CD since I ran out of USB’s and the IPMI on this ASUS board doesn’t work as well as my ASrock board for my Windows system. I did a workstation reinstall creating my newly sized /boot partition. Mounted my /home and made an entry for it in /etc/fstab did a “mount -a” to test it. Then ran the “dnf” commands above and then did:“dnf install $pkgs’ >> fedora-app-re-installer.sh” but packages were already installed. Did some updates logged into my workstation with my username and it had all my prior settings as if I never left, except I had to redo my selinux policies I had in place from before and my workstation was up and running again. Nothing fancy just planning ahead which is what IT is all about.

I them tackled making my virtual system that hosted my Salt master and Plex media server instance a larger drive because when I went to update Plex it said it was out of space. Since it’s a virtual system and I have plenty of storage space I simply did the following:

No big deal done in like 15 minutes going from 50gb to 100gb partition. Since I have so many movies and TV shows plus tons of music the Plex database is quite large and I don’t have time to prune it constantly. I could also have used the disk space created another directory and created a symbolic link to that file but this was cleaner.

My Zoneminder after updating to 1.36 started having memory issues and camera streams kept stopping and starting. seems they made some improvements to capture more frames instead of skipping them. I’m not fully in tune with what hey did and I have other priorities now though I did try a lot of different buffer settings and finally ended up settling on “Maximum Image Buffer Size (Frames) =500” with my 49GB of RAM and 5 cameras that seemed to get me at a good place where everything was capturing all CCTV events plus camera streams were not stopping and starting as memory filled and was released.

I had contemplated throwing more memory at it since I could easily go up to 192GB on this bl460c gen7 blade of DDR3 RAM. Things looked rosy but I still wasn’t satisfied so I called up my local place to get surplus server equipment picked up 2 more 16gb ddr3 1333mhz ecc ram sticks and put them into the banks previously occupied by 8gb sticks, moved the 8gb sticks to the last banks occupied and now I’m at 80gb of RAM on this system.

After booting back up wow Zoneminder is running so smoothly now as it’s no longer writing to swap and staying only in RAM. I’m sure this will also help my main Plex Media server instance that runs on this system. This is also the system that used to hosts my ShoutCast and IceCast music relays. This is one reason I moved my music relays off of this system so that I could experiment more with improving my CCTV Zoneminder without affecting the music streaming of Snakceice’s House of Beats.

This is an example of how my system was swapping to disk and isn’t now:

There were times before adjusting various buffer settings in Zoneminder that swap and memory were both near zero free when using unlimited for “Maximum Image Buffer Size (Frames) =500” or larger settings for that. Now my Zoneminder is so fast and I’m sure Plex will benefit as welI. I wish I had increased memory before. This may keep me from virtualizing Zoneminder anytime soon though . I will have to dive someday dive deeper into Zoneminder to make it more efficient so that I could virtualize it potentially. Currently I have spare blade servers for my HP C7000 so will go with this.

Just a sample of a few simple things I have done this week, nothing special just keeping the environment alive. I think recalling and writing this took longer. I am also doing a lot of work on my website on a new virtual server updating themes, database etc. plus doing syncs with my active websites. Fittingly the Michael Jackson son “Working Day and Night” just came on.